The International Self-Care Foundation’s World Healthy City Award is designed to focus attention on, and provide examples of, how city authorities can encourage self-care and healthy lifestyles at the community level in their cities. In July 2017 the ISF Healthy City Award was awarded to Kunming City for progress and achievements in developing a living environment supportive of self-care and healthy lifestyles.

In the opinion of the ISF survey team, Kunming is a worthy winner of this award. The team particularly noted:

Many other details positive for encouraging the healthy lifestyles of citizens were noted. On behalf of the International Self-Care Foundation, ISF President David Webber was delighted to present the 2017 ISF World Healthy City Award to Kunming City Deputy Mayor Li Maozhong (pictured). 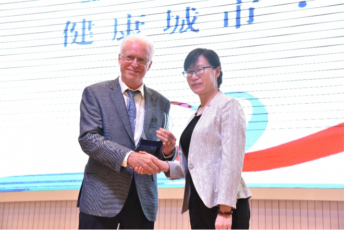